How I Got Started in Football : Part 2 – My Senior School Years

I attended Jordanthorpe Comprehensive School at Meadowhead in Sheffield, and the next few years here were to shape my future life.

I turned my hand to most sports, representing the school at Football, Cricket, Basketball, Swimming and Athletics (although for me it was field sports only such as Shot and Discus, as I hated running!).

I also went on to represent Sheffield at Football and Cricket.

I’d had a trial for Sheffield Boys Football in Junior School but didn’t get in due to my transition from Centre-Back to Goalkeeper, however this time I was selected for the Under-12’s. 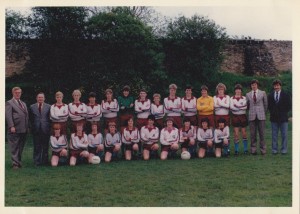 It was here where I met my teammates who went onto be involved in the pro game, John Beresford who went onto represent Man City, Portsmouth & Newcastle, Lee Walshaw, Darren Bradshaw & Tony Daws who were all involved with Sheffield United, and Alan Smith who was at Sheffield Wednesday.

Following our performances with School & Sheffield Boys at the age of 12/13, myself, John and several of the other boys were invited to train at Sheffield United where Harry Haslam was the Manager. His assistant at that time was the effervescent Uruguayan Danny Bergara (who went onto manage Stockport) who lived near to us. I also went to school with his son, Simon.

Danny was to have a great influence on my early years as a Goalkeeper. I used to go with him to a nearby field behind the nursery school at Bradway, and spent hours with him shooting at me.

Danny like many of the Latin players could really make the football talk: bending, dipping & swerving the ball from all angles. If I could stop shots from him, then shots from my age group would be a lot easier! This training gave me an edge that really helped me progress.

As well as Sheffield United, I was invited to train at Sheffield Wednesday when Jack Charlton was manager and the first choice keeper was Bob Bolder (I always remind Bob of this when meeting up on Masters matches, where he has been playing for Liverpool). Invites also came in from Allan Clarke at Leeds, Bobby Robson at Ipswich and Lawrie McMenemy at Southampton.

Following a game for South Yorkshire I was approached by the local Manchester United scout Ron Cattell, who subsequently invited me to the club in the next school holidays to train with fellow schoolboys.

At Fourteen years of age I had a big decision to make, which club I should sign schoolboy forms with: one of my local teams, Sheffield United or Wednesday, or go further afield and join Manchester United?

Harry Haslam & Danny Bergara had got the sack from Sheffield United with Ian Porterfield replacing them.

I didn’t have the same emotional tie as I had with Danny & Harry, and after discussing with my parents I made the decision to join Manchester United. 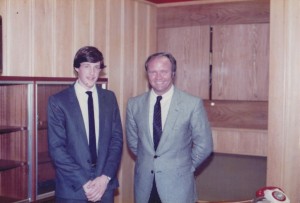 One of the reasons for this decision was that I would only go to training in the school holidays, whereas with the local clubs the boys were required two or three nights a week. At that time I had my O-Levels to study for, as well as football for school, for Sheffield, and for Throstles – my Sunday side.

I was also still swimming competitively and playing Basketball for the school, and by joining a local club I would not be able to continue with my other sports and it also may affect my studies.

Obviously today clubs are taking boys as young as 7 and 8 into Academies and Centres of Excellence, so it is a very different scenario!

The following year was a huge one for me in footballing terms. Representing Sheffield Boys for the last few years was an honour, and in our final year we were involved in the English Schools FA Trophy, a national competition. 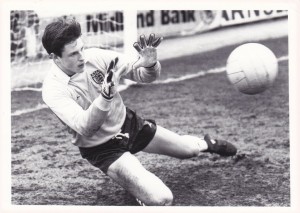 In the pre-season we had played a Coventry team who were physically bigger and stronger then our boys, and they comprehensibly beat us 4-0.

This turned out to be a significant turning point for us, and we recovered from this early setback to fight our way through the ESFA Trophy rounds and reach the final… A two-legged affair against that same Coventry team! 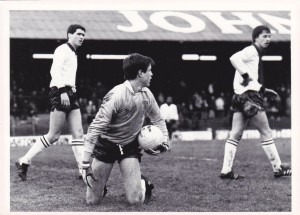 Our team manager Phil Dolby realised they would have the psychological edge over us, he therefore decided to introduce us all to our first experience of sports psychologists, and the power of positive thinking.

It obviously worked, as we beat them 1-0 at Bramall Lane and we then had a fantastic 4-1 win at Highfield Road.

We won the trophy for Sheffield for the first time in many years. 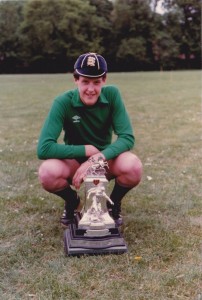 That was not the only success John Beresford and I had that year, as we were invited to England U15’s schoolboy trials – culminating in a final trial at Lilleshall (you will see this photo in Tony Adams autobiography, he’s pictured in the front row, third from the right). 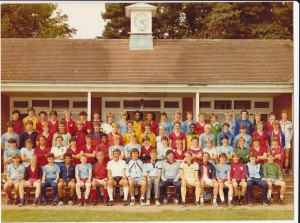 Following this trial, John and I were both selected for the squad, a fantastic honour! 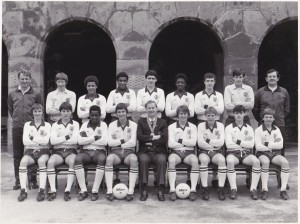 The first match was against Northern Ireland at Oakwell where I made my debut and we won 4-0. The next was a 3-2 win against Wales, before I then made my first appearance on the hallowed turf of Wembley Stadium.

I was 15 years old, and will never forget walking up the Wembley tunnel and being hit by the wall of noise being made by 77,000 screaming kids. 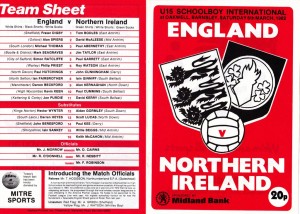 My legs turned to jelly as we walked to the middle of the pitch. This was the proudest moment of my young life to stand with the three lions on my chest, belting out the national anthem. I still get shivers down my spine every time I’m at a game and I hear the anthem, it is something that never leaves you.

That year was a very special year, but a hard one as it was also exam time, and I was taking 10 O-Levels.

My final year at school was a 100% concentration on my school work, but with one eye on my future – and it eventually turned out to be an even more important year as I had a massive decision to make when I was offered a two year apprenticeship at Manchester United!

I went on to achieve 9 O-Levels, with grades from A-C. The only one I didn’t achieve the relevant grade in was “Technical Drawing”, as the teacher was a big football fan and whilst everyone was working we used to discuss football – suffice to say, I never fully concentrated on my work!

So the biggest decision of my life needed to be made: Do I go to University and continue my education, or do I follow my dream and join one of the biggest football clubs in the World? As you probably know, I chose the latter!

Part 3 to follow: The First Rung of the Football Ladder

One Response so far.