Extracted from thewashbag.com – Thanks Ron!
In our first in-depth interview with a Swindon Town legend, Ron Smith interviews Fraser Digby on his career and life after football. Fraser and his washbag were the inspiration for this site, so it was a great pleasure to meet and interview him.

In this final part, Fraser talks about his biggest regrets, his greatest matches, saves and inducts our 17th entry into our Hall of Shame.

You served at Swindon for twelve years and have made the third highest number of appearances of any Town player. There probably isn’t going to be another long serving player like you anytime soon.

I would be surprised because the things have changed, the whole parameters of football have changed. I think they said at the time, what was that ’98 that they didn’t think that many would have testimonials. When you see the likes of Giggs and Scholes at some of the bigger clubs, but then you see the likes of the mercenaries who come across for maybe 3 or 4 years. I don’t care who you are or whatever league you are in I think you are going to struggle to match 10 to 12 years.

What was the greatest match during your time at the County Ground?

For me the two Wembley games were the best games to have played in.

Memorable games were ones I always had against West Ham United as I always seem to play well against them. I remember we had a cup game at the County Ground – FA Cup Fourth Round 28th January 1989 Swindon Town 0 West Ham United 0 – and that was certainly my best performance in a Swindon shirt. I saved a point-blank header from David Kelly… it was just one of those games where they threw everything at us, and me, but I saved it.

Then in the Premiership the 2-2 draw at Anfield was a big highlight, particularly getting a standing ovation from The Kop at the end of the match.

That 1990 team didn’t get into the First Division. All the events were out of our hands, nothing to do with us.

The other regret was not going to Real Madrid! I had all the Sunday papers on the phone saying they heard Real Madrid were watching me. I think it was Lou to be fair, to take the pressure off him at the time. There was some bloke with a sombrero on in the stand – they put two and two together and got five. Real were after a ‘keeper at the time and for some reason my name got banded about.

The player who I enjoyed most was Alan Shearer. In the Premiership he kept scoring hat tricks, but he scored two in both the games against us. Up there at Ewood Park I had a great craic with him, I remember saving a shot from Shearer late on that would’ve got him his hat trick.

He was a fantastic player, who scored the goals and was difficult to read, someone who I had a good battle with. There was no way I’d let him score a hat trick against me; I told him that as well!

Best backline in front of you?

That’s got to be David Kerslake, Colin Calderwood, Shaun Taylor and Paul Bodin.

For me the change to the backpass rule killed it for me. I preferred it when I could take the ball and roll it out, with Glenn picking it up short, he’d pass to Kerslake, pass back to me which I’d pick up and throw it to Bodin.

What was your best quality as a goalkeeper?

Consistency. Didn’t make many mistakes. That was the bit I prided myself. That is the requirement for any top goalkeeper – don’t make the mistakes.

Do you remember any particular goal scored against you and think that was fantastic?

Well…because he keeps reminding me after all these years…Ian Wright’s [for Arsenal] at the County Ground.

I was with a business colleague last year who had just been with Ian Wright doing some coaching, when he mentioned he would be seeing me Ian said ‘tell Fraser about the one I did him up!’. Even when I went to Palace and Wrighty came into training he’d be reminding me of it all the time. I said to him ‘didn’t you score any more goals?!’ To be fair it was a great goal.

I’d have to say Lou. But I’ve got to be honest, the one manager who did something that no other manager did was Terry Venables.

We [Crystal Palace] were playing away at Swindon and he called me into the office – bearing in mind he had been the England and Barcelona managers – and sat me down with Terry Fenwick and he wanted to know everything what was happening with Swindon, what I thought about the team, what their strengths and weaknesses were, and I never had that before, no other manager has ever asked me for me view before. That’s one thing that’s stuck in my mind about Venables, the training was also brilliant, he was a great coach and he was a great bloke to work for.

Obviously – while he was only my boss for two months – Sir Alex Ferguson, because I’m rather biased towards United anyway.

But Lou really stands out, because Lou was the one who sent me on my way in the game.

Greatest save you ever made?

The save from a header by Ged Brannan in the Play-Off Semi-Final second leg at Tranmere. He’s headed it and I’ve gone full length and saved it, pushed it onto the post. The best save I’ve ever made.

It would have to be the red Spall tracksuit that we had around 1989/90. Got to be! That was the most hideous thing I’ve ever worn in my life! That’s got to go in on its own….actually that and Steve White’s shoes…don’t tell him that! 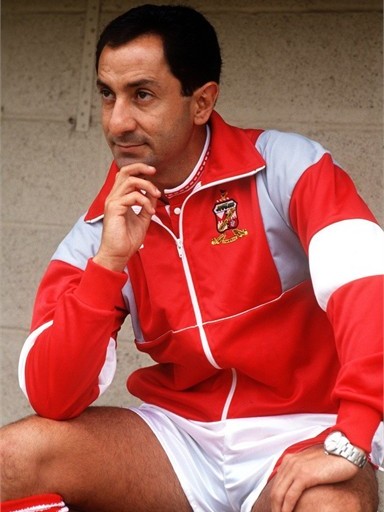 Ossie striking a pose in the tracksuit

So then your washbag…

Yes! It’s still getting a mention!

I actually don’t ever recall having a tortoiseshell comb in my washbag, but I must have done otherwise he couldn’t have nicked it!

That whole exposure and story was incredible. That season when the songs all came out, people were just phoning me saying have you heard this, then there was another one. I decided to surprise Danny and ended up signing on his show. It’s funny because anyone I meet now says they’ve just been on Google and watched that clip and they absolutely piss themselves laughing! It’s just gold, I made a fool of myself! 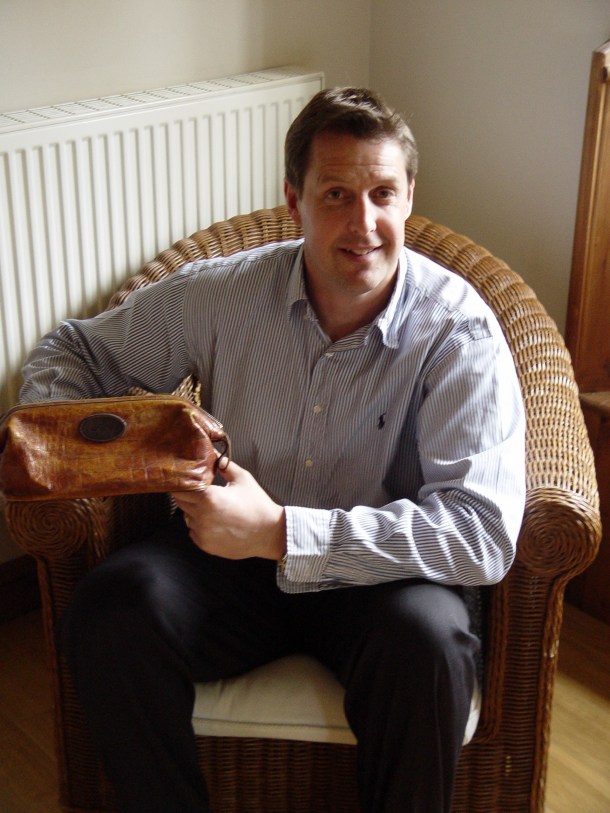 I was talking at the game the other day to someone who worked with Danny, the bloke’s a genius, absolute genius, he’s just so clever how he puts things together and how he did that, all those songs – I think 36 in the end – based on the washbag. My favourite is the Barry Manilow track. It was unbelievable the amount of people who wrote in versions of the washbag song. When I met Danny, Izzy had told me she’d received another four that day, it gripped it, really popular!

I’ve actually ‘the washbag’. The wife brought it for me for my 21st birthday! I don’t use it anymore, it’s sat in my wardrobe at home.

Thanks for the interview Fraser!