In this fifth of six parts, Fraser talks about life after Swindon at Crystal Palace, a stint in Wales, QPR and retirement.

It must have been gut-wrenching to leave Swindon after so many years?

Oh yeah, twelve years is a long time. I had some great years at the club, I made some great friends and I think that is one of the reasons why I’m back here, I’m back in the area.

A lot of the other players went off to other clubs, I went to Crystal Palace, QPR, I could’ve settled down London way, but I moved back to here.

At Palace you regained regular first team action, what were your memories of your time at Selhurst Park?

It was a difficult time at Palace. When I moved there, Kevin Millen was first choice, I knew Terry Fenwick when he was here, Terry Venables was manager and Terry Fenwick was his assistant. Terry [Venables] said ‘I want you come in, I want you to push Kevin’. It was a big club Palace, they had the likes of Michele Padovano, Sasa Curcic, Attilio Lombardo, Neil Shipperley… some real big players and it was an exciting time there.

There were great facilities, great training ground, Terry Venables was a great coach – I won’t have a word said against him – it was a good time that he [Venables] was there. But then Mark Goldberg lost all his money, they had to sell the best players, Steve Coppell came in and steadied the ship and we managed to stay up [in the First Division] that particular year.

Then Simon Jordan came in and pissed everybody off and we all started to leave! I had a few personal issues as well and I ended up getting a pay-off. 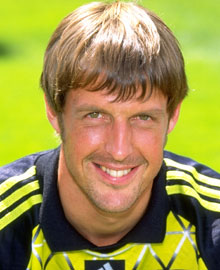 After that you ended up at QPR, but you didn’t go straight to Loftus Road…

What happened I got a pay-off, I had a shoulder injury anyway that I had been carrying from the year before and it wasn’t 100% right, so I went into Swindon and got myself fit with Dick [Mackay].

Then I went for one training season with Ian Holloway down at Bristol Rovers – because he had got Nick Culkin on loan down from Manchester United – and I thought ‘let’s go in here and see what I can do’. I smashed my knee up the first day I was there and I did my posterior cruciate. So I got no club, no contract, no nothing.

So I had to get myself back fit and towards the end of that season I actually got a call from Peter Nicholas after the transfer deadline – who was at Crystal Palace when I was there – he was now the manager of Barry Town [in the Welsh Premier League]. He said ‘Fraser, I’ve got two months of the season left and I need a ‘keeper desperately’. I said ‘I’ve only got one leg!’, he said ‘you can play with only one leg in this division’. So I went in there, we won the Welsh league, the Welsh FA Cup and we lost in the final of the Welsh League Cup. So I’ve got my Welsh FA Cup winners medal…perhaps my most successful season.

That was when Barry Town were top in the league, in the European Cup.

And then the following season he asked me to go back to play in Europe, but I turned it down, I said ‘no I want to get back into the [Football] League’.

I went pre-season – briefly – to Birmingham City under Trevor Francis, because Ian Bennett had broken his thumb he was going to give me a three month contract. Then Dave Bessant was supposed to be going in instead, so I got stitched up a bit on that.

Then I got a call from Lou [Macari] wanting me to come up to Huddersfield. I lost about a stone in a month, he absolutely beasted me! Joe Jordan was there at the time with Ashley Grimes, so with Joe, Ashley and Lou it was like the three stooges! Lou I could take it off because I had a lot of time for him, but Joe and Ashley were a nightmare. I spent several months there and then I got the call from Ian Holloway and I went into QPR.

How was your time at QPR?

I had probably the best game [in my career at QPR]. The first game we played away at Notts County. I had probably the best game I’d had in my life, one of those games that only comes along only so many years. I signed a deal there, but then because of financial problems at QPR over the next 18 months, we lost to a low ranked team in the FA Cup, Ian said ‘I haven’t got the money to be able to keep you’. I decided to call it a day, I was 36 and I’d had enough of the politics of football and I retired.

Retirement…but you didn’t buy a pub…

So I retired and I talked to a few businesses. I went into Swindon and did a bit of sales and marketing. Mark Devlin who was Chief Executive at Swindon was the sales and marketing manager at QPR, so I knew Mark. I went in to see Mark and said this is what I want to do…

What got you interested in the business side after the game?

I always followed what Bryan Gunn did. He was at Norwich City, then had a testimonial against United and then he went into sales and marketing at Norwich. And I thought that could be something that I could do. I went in with Mark, who could only pay me for a couple of days. After that I went to work with a friend who has a contract cleaning business and it was about using my name to get corporate [customers] into the business. That’s how I started on the business route and it went from there.

Did you ever have aspirations to move into coaching or management?

No, I didn’t want to do management as I thought you have to be a certain person for that, and I knew I wasn’t that fixed on it.

Coaching side of it, I would’ve potentially done my coaching badges if I could’ve just done my goalkeeper’s badge. I just wasn’t interested in outfield players as I had done twenty odd years as a goalkeeper.

You had to do a certificate, then the B License, before you can even do any goalkeeping certificate. So I turned round to the FA and said ‘not interested, I don’t want to do my C then B certificates and then do my goalkeeping coaching; you just let me do my goalkeepers badge’. They wouldn’t let me so, I didn’t move into coaching.

As it happens then – when Andy King came back into Swindon – I was with Mark Devlin and Andy talking about Rhys Evans coming back to the club and Rhys wanted me to do some coaching with him. Andy wanted me to do a couple of mornings coaching, which I took up during the week and the rest of the time I devoted to my sales and marketing. It was going well and I was then pretty much working full time for them. Slowly but surely they cut down my time and I ended up leaving the club.

Now you’ve got many business interests including a distributor for Errea, Ballmax and others, how is life after football?

I’ve always had a lot of connections in this part of the world. I worked for myself, I worked for friends, including a friend who bought into Millennium Radio Cars – now V-Cars. Then I did some work with some guys at a Spa in Cirencester. Then there’s all the work myself, helping them to get in with the corporates – so when you pick the phone up and its someone who says he’s Fraser Digby, you can hear the clogs ticking – saying where do I know that name from – so I’ve been able to help my contacts get into places.

I was with a company for five years, a company called Sport Solutions who are  a sports development consultancy. Basically they were the ones who did the relocation for Cirencester Town FC and the team that put that together became Sport Solutions. The plan was something I was passionate about, is basically to help some of these non-league clubs who are invariably in the middle of towns with not a lot of facilities, no money and no income streams, to sell their land for development and move them to a better site with far more land and pitches. Cirencester went from one senior team to all of a sudden having the Academy and kids teams. That’s a great example of a community club that’s thriving following relocating.

How did you contribute to Sports Solutions?

My strengths were phoning up the chairman of these football clubs and because they knew my heart was in football we wouldn’t be stitching them up. They were willing to work with us. Thame Football Club is a great example of what Sport Solutions have done. Ultimately, hopefully, another big local project relocating Wootton Bassett Football Club will finally come to fruition.

What keeps you busy at the moment?

For me now, I’m working on a project for the last two years which is taking my whole time and money, which we hope will launch – if it doesn’t it’s a bit of a nightmare!

In the meantime I’m taking all the distribution for Errea in Wiltshire. So I’m starting marketing it, so if anyone wants any sports wear, any kits, we can offer them a good deal, and most importantly I want to offer people a personal service. I know how I want to be treated, if I go and buy something I want to be looked after. What I’d like to say to the local clubs is I’ll come out and show you what we do, show you what we’ve got, and we offer a good price for a quality product and that’s why I’ve got involved with it. The big thing for me is Errea have the designs for three years, but with Errea – because they manufacture their own in-house in their factories in Romania and China – it means that if you want that particular kit forever more, they will produce it for you. I know I can offer people good value for money, good service and I’m still connected with football.

It’s a business that I’ve only just started and I’ve got to start and build it. I’ve a few clubs under my wings so far and I want to be able to look after them and hopefully more people. What I want people to know is that they can just pick the phone up and it’s me at the end of it.