In this second of six parts to be published over the next couple of weeks, we talk about life at the County Ground under managers Lou Macari and Ossie Ardiles, including the impact of demotion in 1990.

What memories have you got of working under Lou Macari?

For me I always had a good relationship with Lou. He brought me to the club, he put me under his wings and he took me as one of his sons.

If he took you under his wings, did he treat you differently to any other player?

Probably not. He had his ways and means, he treated people differently. So certain people he’d have to give a kick up the arse, he wasn’t going to put his arm around Steve Foley, he give him a kick up the backside. But he knew the players and he knew how best to get it out of them.

You could see that by the players, the most successful players signed for this club, bringing in players and then selling them on, most of those players were those which Lou brought to the club. You look, it’s incredible the amount of money he made for the football club, he’s got to be one of the most successful managers of his time.

Much has been written about Lou being a harsh disciplinarian, similar to today and Swindon under Paolo Di Canio…

Do you know what that is one of the big things. I’ve heard stories about now, some of the players coming in and the way they train, no disrespect [to them] some of the training we did under Lou was a damn-sight worse than today.

Can you imagine players of today turning up for training on a Thursday morning and Lou is stood with a stopwatch by the changing rooms, we’d get the trainers on, leave the club, run down Queens Drive, left at Coate, down to Dorcan and then back down Shrivenham Road. It was five and half miles. The best lads, the people like Leigh Barnard and Chris Kamara used to do that in 32 minutes, I used to come in around 37. [As a result] the Town goalkeepers at that time were the fittest in the country because of the work that we did, so much it was phenomenal.

Now I can see what Paolo is doing with the players, it’s very similar along those discipline line. What he did with some of the boys [Simon Ferry etc] after they went out is exactly what Lou would’ve done in that situation. The only difference is Lou would’ve had them in on a Sunday morning, but actually I think Di Canio also does that – Sunday morning training, so it is similar. 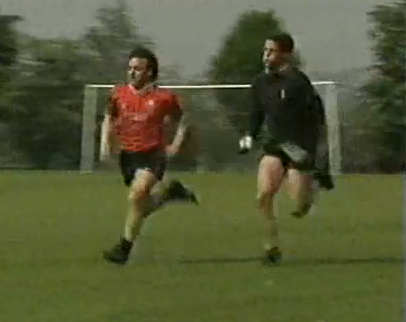 So when Lou left to join West Ham was there any an opportunity to follow him out?

Yes. Although I didn’t know at the time.

It was only since finishing playing it was mentioned by the chairman that came in, Ken Chapman – who I know really well – and he said that at the time there were one or two things that had gone on that obviously I can’t repeat. The bank wasn’t doing the bank any favours so Ken had to come in to balance the books.

It was either me or Alan McLoughlin to leave the club. When Alan was going to go for a million Pounds to Southampton, if I went for a million Pounds the Club would only get half the money [as Manchester United held a 50% sell on clause] and then they would need to pay at least quarter of a million to get a half decent ‘keeper, so they’d only be left with quarter of a million. Selling Alan they had enough decent midfielder players to fill the gap, [although] you’re not totally going to fill the gap as Alan was a quality player.

So that was how it went. Alan went first for a million pounds, then there was talk about me joining West Ham for the same money, but it wouldn’t have been a good deal for the club.

The great Argentinean Ossie Ardiles took over in the summer of 1989. What were your reactions at the time?

With Lou’s ways perhaps we could only go so a certain way, when Lou left and Ossie came in he changed the mentality, he changed the personnel to a certain extent, and a lot of the team that won at Wembley in 1990 was Lou’s team; with just the added technical stuff that Ossie brought to the club. But we were fit and that was the difference.

The difference was, the reason why we did well that first year in 1990 after Lou had gone, was because we were still living on that fitness from Lou. Ossie brought in that confidence to play, the little one touch, the 5-a-sides, you know the way he used to play as a player, but we’d already that grounding of fitness.

I was there that day at Wembley, a fantastic day. All that followed made me learn the harsh realities of football, but what were your memories of victory over Sunderland.

It was a phenomenal day. We enjoyed the day. It was one of the most one-sided 1-0 victories I’ve ever been involved in! We totally deserved the win.

I remember celebrating afterwards getting on the coach, the big thing for me was when we drove back into Swindon, everyone was on the bridges, on the side of the road, you’re never going to get anything like it again unfortunately. You always remember, that for me was what really stuck out. Then back to the hotel and celebrating all day long.

Were the players party to information concerning the financial irregularities and potential consequences before our trip to Wembley?

No. It was only afterwards. The visits from the Inland Revenue and all those sorts of things, the harsh realities of it comes to the fore.

At the time when you’re playing your game you don’t expect, you expect you’ve done this football and we’ll stay where we are.

We won it on the pitch fair and square. It wasn’t as if we had been paying for players illegally. We players went out there and done our job, and got promoted.

And that’s the only one regret I’ve got in football, is that team there didn’t have the opportunity to play in the top division.

I completely agree. I still believe that the side in 1990 was a great team and were well equipped to establish themselves in Division One compared to when we did reach the top flight in 1993.

Yes. The problem [following promotion in 1993] was in 1992/93 the Sky money had started coming through and the gap was already becoming bigger between Division One and the second division. So back in 1990 we definitely had a better chance of holding our own for at least a year.

All the players in the group were younger and that would’ve helped. The likes of Colin [Calderwood] wouldn’t have gone and that’s the difference. If we would’ve kept that team together and got some more in to establish ourselves.

How did the events post Wembley in 1990 impact on the players? Looking back now what’s surprising is that there wasn’t a mass exodus.

We stayed together because we had then gone back to where we were [following re-instatement in Division Two]. I think that had we got relegated two divisions [to Division Three as originally sanctioned] it would’ve been a different kettle-of-fish.

It was a difficult, it wasn’t as if some of the Division One clubs had come in for some of the players, saying we want him or we want him, it didn’t work out that way.

I can’t see that some loyalty happening today…

So out went Ossie towards the end of 1990/91. Why did it turn sour post Wembley?

That following year [after demotion] we lost our way totally because Ossie didn’t want to enforce the heavy handed approach. He wanted to give the lads a bit of freedom, a bit of space, due to the disappointment of getting demoted. Really it needed someone like Lou to come in again and say right, get you by the scruff of the neck and go.

However much I loved Ossie, he ended up losing it. Because he lost the team and he got little cliques in there that tried to control things; we weren’t playing as a team like we were playing under Lou because everyone was in the same boat, he [Lou] didn’t like you going out drinking, going out eating, so many things that Lou [would’ve frowned upon], but we then all worked together. I remember when people didn’t like it [but] we were successful.

In what way did Ossie ‘lose it’?

He lost the dressing room really, not in a nasty way, but the fact is there was divisions in the dressing room. There were certain players that were basically influencing Ossie, I won’t name them but I know who they were. So they tried to influence him and Ossie was soft, he wanted to please everybody.

In what way would a player want to influence Ossie?

Team selection, the whole lot, training, you know. They spent a lot of time with Ossie and it was always going to go wrong. And that’s what ultimately happened and Ossie jumped ship and went to Newcastle.

Another crucial factor was the sale of Alan McLaughlin…

Yes [although] that was very much to do with the finances. Money had to be found to pay back the bank.